A Visual Guide to Google’s Evolution

Google hasn’t always been the behemoth it is today. When Google was first launched in 1998 it was a small blip in an industry dominated by competitors with millions of dollars in revenue and users to match. One one side of the market were portal based sites like Yahoo, Lycos, and AOL which had combined features from the web directories they had superseded with search functionality. On the other side were sites like Excite and Hotbot with search engines more like Google.

In order to win Google had to be completely different, it had to be faster and better. And for those who remember search back then, it was.

Google was astounding, it actually gave you the answers you were looking for when you asked. The difference was a better algorithm for organizing all of the information that it absorbed. In the infographic below I’ll outline the big changes that have occurred inside of Google’s algorithm in terms of functionality since it’s founding in 1998. While I won’t perfectly cover how Google works, you can go elsewhere for that, hopefully the wide strokes will help us understand how it functions and where search engines are going.

Search is simple? Kind of…

On the face of it search engines are quite simple, they’re merely the interface between humans looking for information and machines with data. They take what you type and try to figure out exactly what you’re asking for. Next they have to jump through their organized data fast enough to send you back the information you were looking for.

Most search engines nowadays are incredible, but they’re not magic. The basics of search haven’t changed much. But the intricacy of the process has. Read on to learn more. 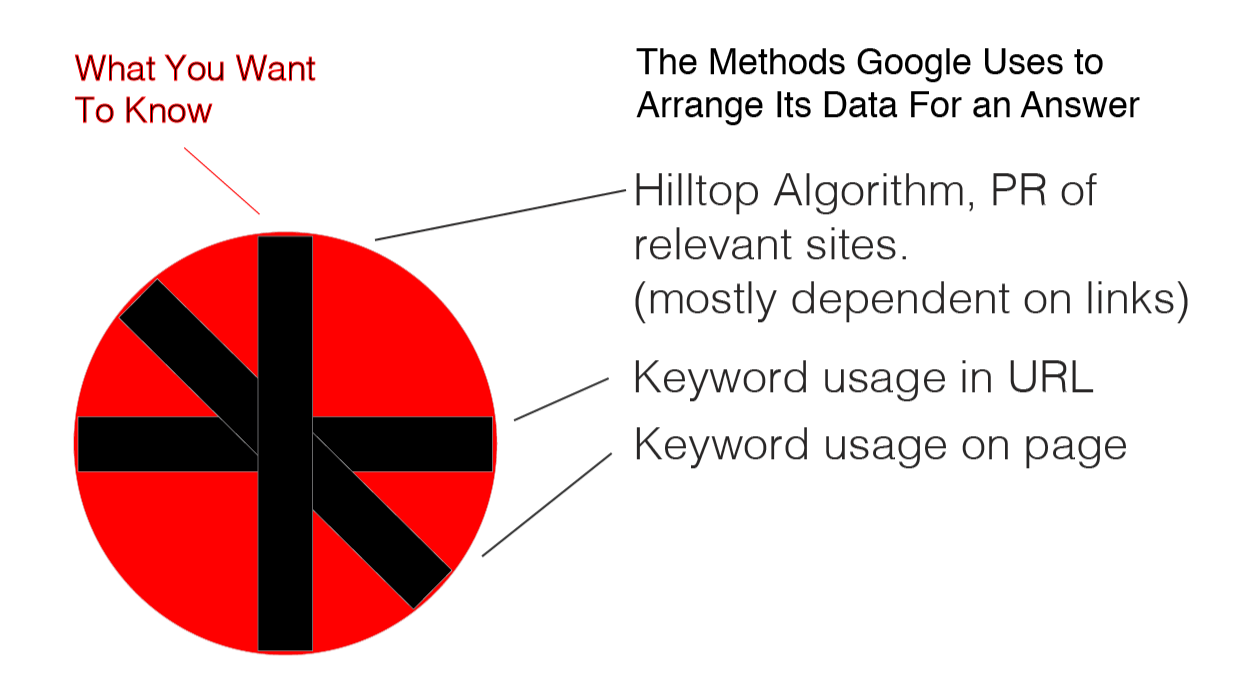 Google, like many other Silicone Valley startups has California’s own version of the Horatio Alger American dream tale. Two geniuses meet in college, get some venture funds, and move into a garage to make their dreams a reality. But how did that happen and why did Google win?

Larry Page and Sergey Brin had the incite that sites, like research papers­ or the library database they were trying to make more searchable, had a hierarchy. You could glean the importance of a work by how well referenced it was. It’s like a local landmark, if everyone references the same work as an inspiration, its probably a better place to start reading then anywhere else.

In the beginning It was enough to figure out how well referenced a site was on a specific topic and then match the keywords on that site with the words people used when they typed in their questions. Matching keywords in a question with keywords on a site took care of figuring out what a user meant. Returning the most well referenced site with the matching keywords then took care of what you likely wanted to know. It wasn’t perfect, but it was effective. 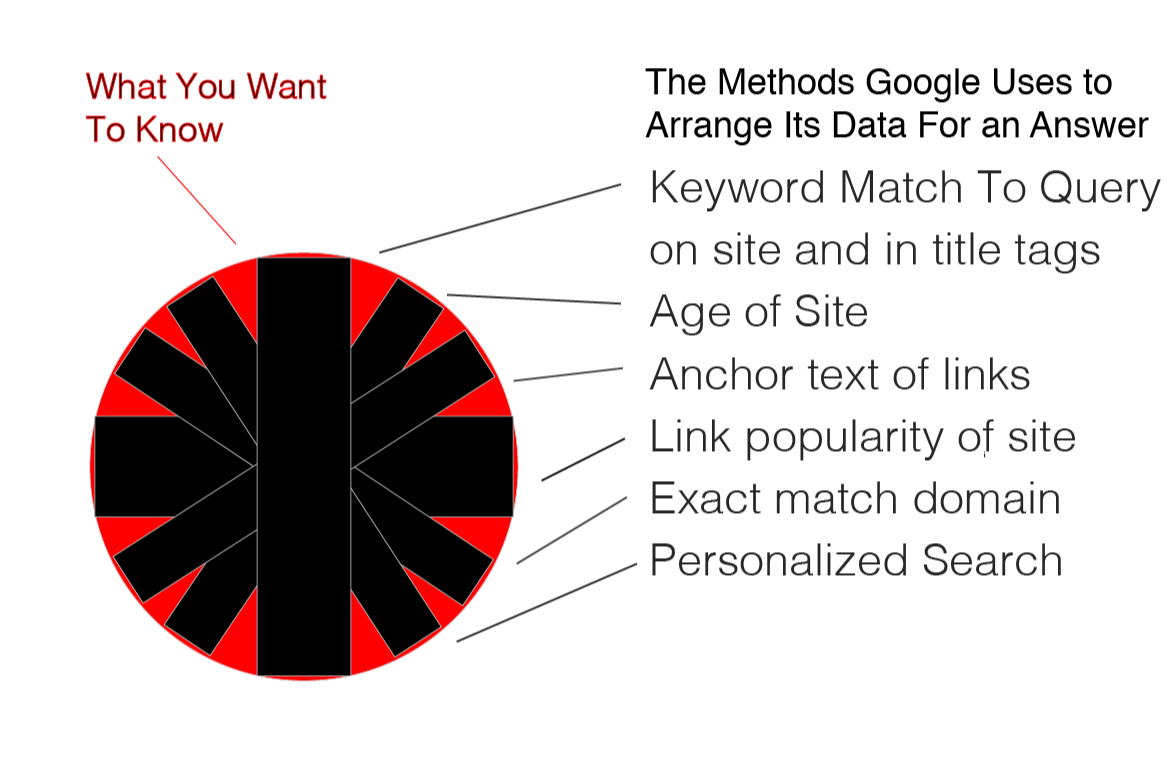 Thanks in no small part to its incredible quality, Google grew rapidly. Almost everyone I ever encountered was an instant brand advocate, and it was almost a prestige symbol to use Google. If you didn’t you probably weren’t that sophisticated with computers.

By 2004 Google hit its apex with 85% of market share through strategic partnership with CNN and former rivals like Yahoo and AOL. While a great deal had changed in the algorithm the quality hadn’t diminished. The only problem was that the increased market share brought increased interest in spamming the service to access its users.

Search engine optimization, or SEO, has been in an arms race with the algorithms since 1997. In response to every black bar an SEO could optimize for, and to keep users happy, Google’s algorithm has to get more intricate. Whereas initially it took spammers pretty far to buy a domain name with the keyword they wanted to rank for and stuff a keyword into an article hundreds of times. By the mid-2000s link buying, spam commenting, and link-networks were also common addition to the mixture of techniques it took to rank. After 2004 Google, and fresh off its IPO, Google was extremely serious about preventing the media and spammers from attacking their system.

By 2005 Google’s major tactics for sorting information were:

By 2010 high speed internet was fairly well spread and 70% of the population had access to the internet. Together this meant that Google could and should gather enough social and user data to provide incredibly refined searches. Google itself really was more social with users, since search became about what people wanted. 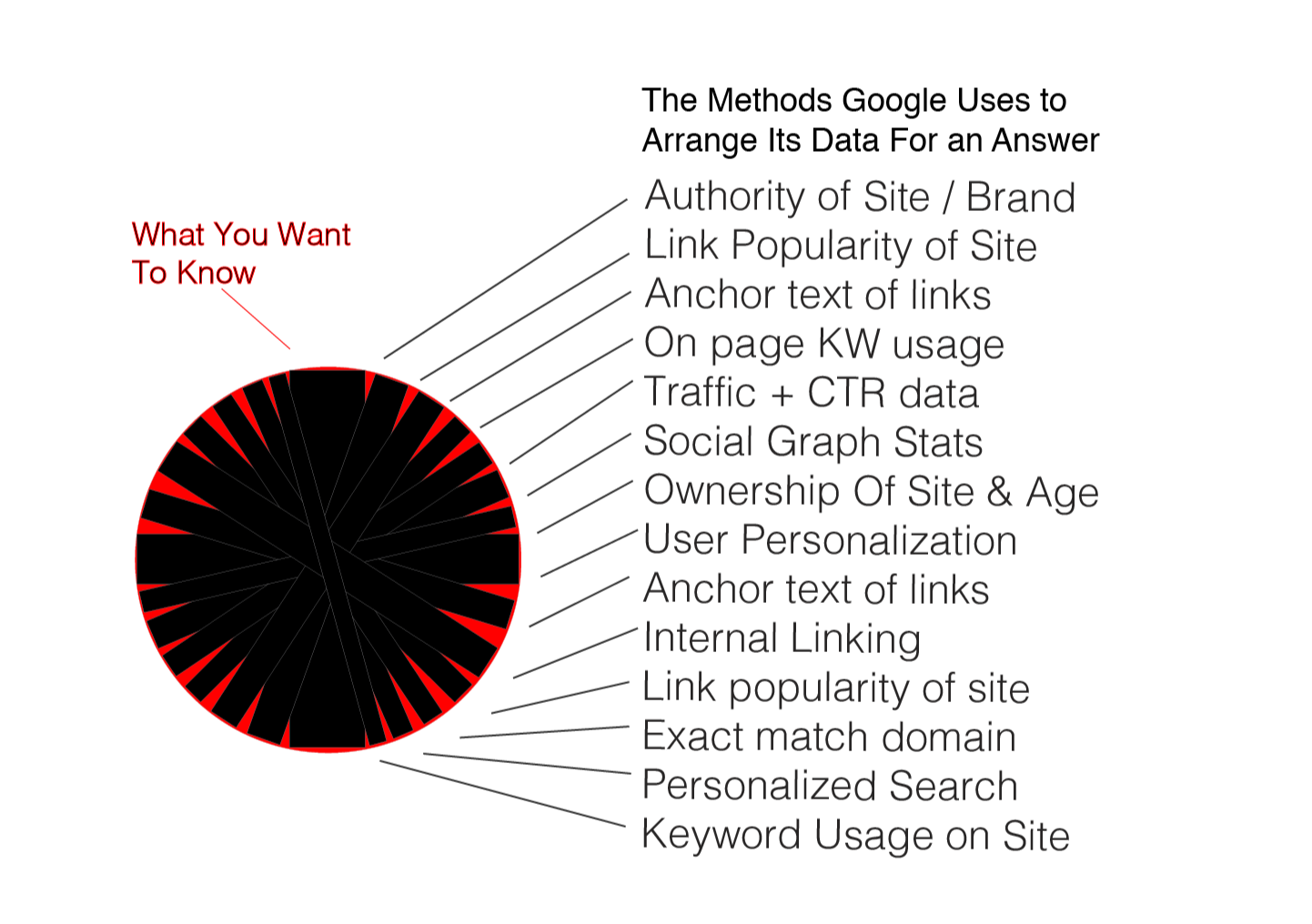 Most search engine have reached, or are close to reaching, this paradigm of humans that refine and serve algorithms, rather than algorithms that serve humans. In a word most of the major search engines that are still around are good enough, enough of the time.

Some won’t remember the frustration of using a search engine and not getting the answer you were looking for, but search engines inside of programs still offer us a glimpse into this reality. When you search in something like iTunes (which has arguably gotten worse over time), Pinterest, iTunes Store search, Twitter, Spotify, Facebook, etc. you’re still using search tools based heavily on word matching, rather than contextualizing users’ intent. More basic search engines place little effort in finding related artists or products when you search, or correcting mistakes that might be in the keywords of your question.

By 2010 the major tactics for sorting data were:

Bing, Wolfram, Duck Duck Go, and Google are the only search engines that are around this level of quality. Search engines like these not only integrate user metrics into their search results, but to varying degree contextualize questions along spatial, geographic, and trending facets of the world. In short almost all searches meet their intended answers. 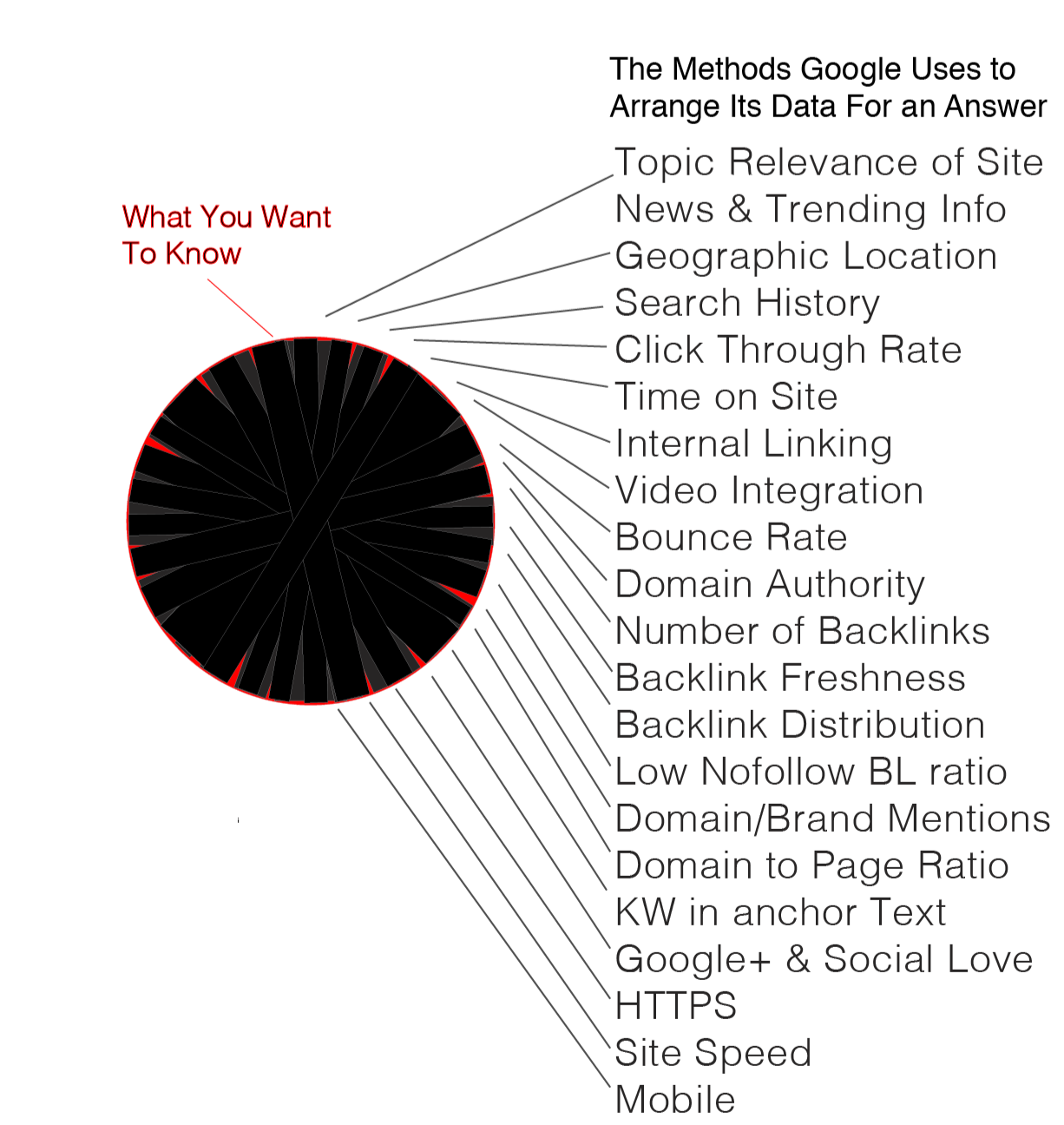 But pushing beyond this is still anybody’s game.

ABC may have Android, Chrome, and YouTube pushing data into Google search but Apple’s Siri, Pinterest’s search, and Facebook’s search have a level of personal contextual information that could create a tipping point in quality.  All the relational data that a company like Apple has on my location, internet usage, and how I frame questions may ultimately be more valuable than what Google has if used properly. On the flipside, a service like Pinterest which knows what colors I like to go with the drapes might provide a better search experience than a service that doesn’t have that kind of detail.

Nowadays Google uses some of the following tactics to organize its information and return an answer:

By 2030 at the latest, things may get really interesting. 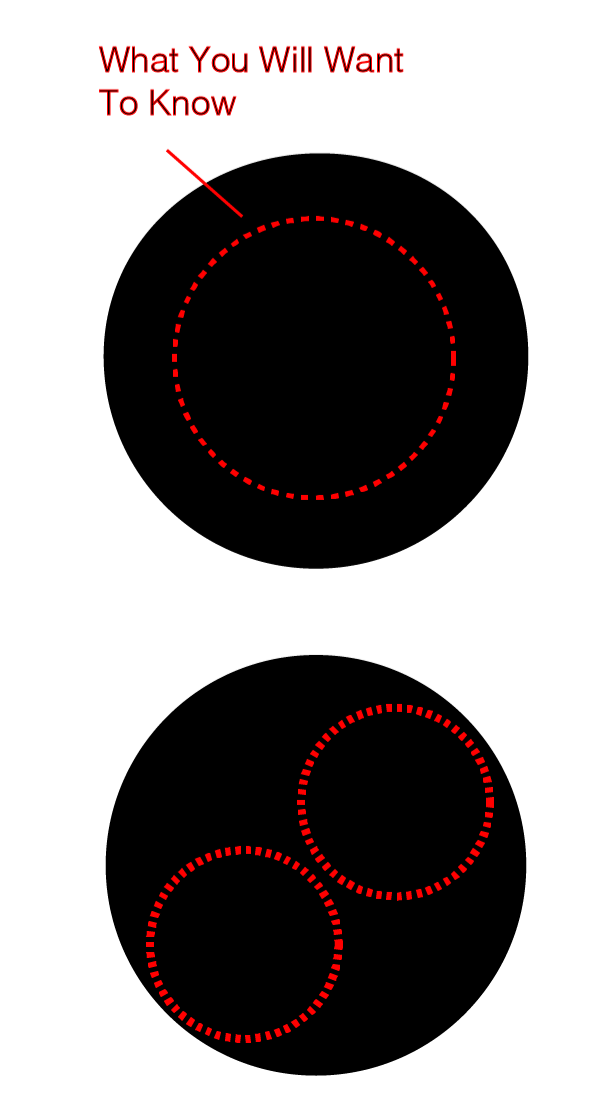 One can easily imagine physical factors like eye tracking, heart rate, & pupil dilation joining the myriad factors that go into how search engines return answers. But search is going to change dramatically given the fact that machine learning will increasingly look like AI, Virtual Reality, the profusion of wearables, and smart devices.  It’s likely that we’re on the cusp of search engines anticipating our questions before we think of them.

querying intent and give us answers before we knew we needed them.

Always play that one song when you’re sad? Google’s got you.

Undoubtedly this logic will extend throughout our physical environment, and between individuals.

This work is based on an earlier piece I wrote about digital marketing strategy.

A Concise Timeline of Google Development From a Digital Marketers Perspective:

This piece would have been impossible without the pioneering work of MOZ and Search Metrics.

iD Marketing tools is devoted to helping marketers and business owners find the best tools and tactics with data driven insights and tutorials.

The 189 Best Marketing Tools On the Market

Search Tools By Their Purpose

Legal Stuff: Tool content on this site is provided as is for informational purposes only. All product names, logos, and brands are property of their respective owners. All company, product and service names used in this website are for identification purposes only. Use of these names, logos, and brands does not imply endorsement. This site is based purely of our own experience and insight with the tools. Although we try ot update items as frequently as we can it's possible that some of the information may be out of date. Additionally although we try to stay on top of features and capabilities those can occasionally update rapidly. Forgive us if something is off, and please reach out so we can fix the situation. Disclosure: This site is a curated collection of the best marketing tools. If a tool that I would already be recommending has an affiliate program I'll probably include an affiliate link to them. But we only include tools we've worked with personally and know to be of legitimate value.